by Brenna Butner May 27, 2017
Hey everyone! At E.G.Geller we're very proud to be part of Soles4Souls in the collection of gently worn shoes to be donated to people in need around the world. Soles4Souls is a nonprofit organization with a basic concept: they get shoes and they give them away. The organization was founded by Wayne Elsey around 2005 after Elsey had already organized a large donation of shoes to victims of the 2004 tsunami that struck Southeast Asia and was organizing a similar donation to Katrina Victims a year later. Elsey was recieving large donations from various organization and companies and started Soles4Souls simply to facilitate the donations. As a comfort shoe store E.G.Geller understands the grave imporance of footwear for foot protection and the overall health of the body and we hope that between our donations and yours we can make a difference in the world.

It's more than a pair of shoes, it's hope.

We have drop off bins at each of our three locations and we encourage you to bring your shoes in or to donate just $1 next time your in.
Also, feel free to ship your shoes to one of our locations or to:
World Distribution Center
315 Airport Road
Roanoke, AL 36274-8011 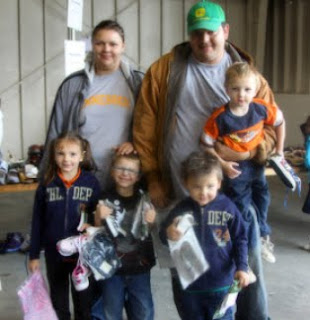 
Soles4Souls has donated over 10 million pairs of shoes through it's five year history in over 125 countries including the U.S., Honduras, Guatemala, Haiti, Dominican Republic, Swaziland, Uganda, Iraq, Peru, Thailand, and Nepal. 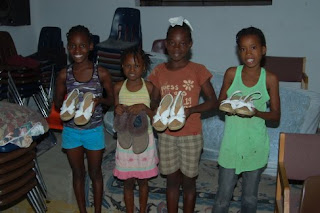 Girls In Haiti After Earthquake